Think of music hubs and London, New York and Los Angeles always come to mind. But when bands announce tours, what’s the one city they never miss? Chicago. Bands choose The Windy City partly because it’s a massive hub for music, but mostly because of the Chicago’s incredible venues. Never been to a music venue in Chicago? Check out the five best music venues below.

1. The Riviera is a plain classic. Walking through the lit up banner that displays “The Riviera,” concertgoers are transported to the old days with a general admission standing area and a large balcony. Curtains hang from the side of the private boxes and the decorated ceiling stands out in the large room. As the lights go down and the band takes the stage, The Riviera packs a punch in the sound quality and is easily known as one of the best music venues in Chicago.

The Riviera’s marquee showcases that night’s lineup and is often a favorite Instagram for most concertgoers.

2. The Aragon Ballroom is a castle. As you cross the train platform and head down the stairs, “The Aragon” sign stands out against the small street. Walking into the building no one expects a castle. Quite literally, the venue boasts turrets on all four sides and a ceiling painted like the sky. Notable sold out shows include Ellie Goulding, Phoenix, alt-J and even Olly Murs. Although the venue isn’t air conditioned (it was built in 1926), The Aragon Ballroom is a popular destination for some of the biggest artists.

3. Lincoln Hall is tiny (in a good way). When someone says a music venue is tiny, it is not always a good thing. But in Lincoln Hall’s case, the small enclosed space behind a bar allows fans to be in breathing distance of their favorite bands. Every year during festival season, some of the biggest names in music chose to play their Lollapalooza after parties at Lincoln Hall. Death Cab for Cutie and Fall Out Boy have both played the small venue in celebration of album releases, selling out in seconds. The venue recently sold to Audioleaf and hopes to grow to become more mainstream. “My intention is to provide […] Lincoln Hall with more resources,” Michael Johnston, 31, told the Chicago Tribune. He plans to add live-streaming to the small venue for an added bonus.

The intimate space of Lincoln Hall allows anyone to feel like they’re next to the artist.

4. The Vic Theatre is just plain different. Known for concerts as well as movie screenings and an incredible stage set up, The Vic Theatre is located in the heart of Lincoln Park. But with that location comes restrictions. One of the only music venues in Chicago to have a curfew, The Vic has hosted artists like Fifth Harmony and Bleachers (Jack Antonoff of Fun.) in the past year and continues to surprise its guests with a variety of acts.

The Vic Theater lies in one of the most residential areas on Lincoln Park.

5. UIC Pavilion brings in big talent. For any solid indie fan, arena shows are avoided and often skipped. But when Passion Pit announced a show at UIC Pavilion, tickets sold out instantly. Although it is a university’s college basketball arena, UIC Pavilion boasts a huge lighting set-up and a powerful sound system. The basketball court is used as a general admission area and the total capacity of the arena is 9,500. 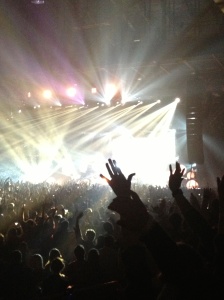 Passion Pit at UIC Pavilion proved to be a light spectacle as well as a music show.

Find a music venue you loved but its not listed below? Drop a note below in the comments.

There was an error retrieving images from Instagram. An attempt will be remade in a few minutes.